In the last 15 years, we have seen a shift in our social culture. In 2008, a black man became president. In 2012, gay marriage became legalized. In 2019, the first Muslim American woman was sworn into office. Everything seems to be changing, and for some that can be scary. However, diversity is important and necessary for a society to progress. Minorities being in official positions only allows for representation among the audience. It’s important for little boys and girls of color to see people who look like them succeed in a variety of fields. It’s important for teens in the LGBTQIA+ community to feel accepted and loved, and not ashamed, for their sexual preference. This “scary change” is just minorities beginning to receive the representation they deserve. Seeing a minority in power isn’t scary, but it’s the mindset our society still holds because it’s not a familiar feeling. There were very few people of color (POCs) and LGTBQIA+ members in power forty years ago. Therefore, that unfamiliarity threatens us and can lead to hatred towards one of the minority groups, if not both. Times have changed now, and it’s necessary that we begin to be supportive of everyone despite our differences. In the words of Maya Angelou “It is time for parents to teach young people early on that in diversity there is beauty and there is strength.” Nobody teaches you how to be inclusive – it’s something you learn along the way. Here are a few tips to help you think about diversity, and to view diversity in a new perspective.

As you become older, it’s important to recognize your values and traditions and how they play a role. It has to be YOUR values and not just your parents’ values and traditions. Being a teenager is the start of developing opinions and thoughts of your own. It’s vital to understand whether what you believe in is a reflection of yourself, or of your parents. Realistically, we tend to agree with information that we were raised with. It gives us a sense of familiarity, and that comforts us. However, if you yourself don’t really agree with this belief, then why continue putting in the effort to spread it? Once you have analyzed what is important to you, see how that plays a role in your everyday life.

Regardless of your values, it’s important to be respectful; respect should be given to everyone, and not just people similar to you. You can completely disagree with a person’s ideals. However, being inclusive means that you still have to show and give every person the same amount of dignity and respect. Accept everyone.

This is one of the most important steps. We hear facts and statistics all the time. According to the Washington Post, reported hate crimes in America rose 17 percent last year. Whether it was ethnicity, religion, or sexual orientation, these numbers shouldn’t be scrolled away from. This is reality. Minorities continue to live in fear of being targets. In an unfamiliar setting with a large group of people, we “water” down. Minorities tend to not bring attention to themselves, usually in fear. We won’t wear our hijabs, so we aren’t called “terrorists.” We won’t wear clothing that makes us feel comfortable, because we don’t want to look “too gay.” It might not seem like a big deal that for one night we can’t wear what we want, but it’s more than that. We can’t be who we want. We can’t be our authentic selves at all times. It’s important to realize the challenges we, as a community,  face every day. Thousands of minorities lose their lives every single day. Understand that these numbers are human lives. Be able to sympathize and feel with these numbers, and with these lives lost. Don’t keep scrolling, as if you didn’t read that percentage or that fact. It’s real. We all need to address the current issues that are affecting our society. Whether or not we are directly affected by it, if we don’t stand together as one, no change will ever happen.

Below are a few steps you can take to become more accepting of people of ALL backgrounds. Just by reading this blog, you’ve already begun the process!

Step One: Understand your own values.

Step Two: Be respectful and kind towards everyone.

Step Four: Don’t be silent against injustice, even if it doesn’t affect you personally.

Step Five: Don’t overthink it. Each step is fairly simple. Allow yourself to venture this state of mind. 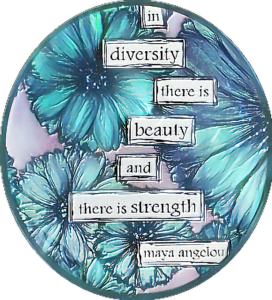 This blog was written by Harini, a junior in High School and a member of the Healthy Young NV Youth Advisory Council.